Trump’s State of Denial, Not the Deep State, kept us unprepared for the COVID-19 Pandemic

I lay out how Trump’s consistent denial of the need to listen to government experts exposes his suspicion of a deep state conspiracy against him and has made this country unprepared to handle the coronavirus pandemic. 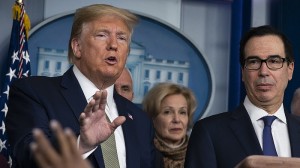 President Donald Trump prides himself on being optimistic no matter how dire the situation. That is not necessarily a bad trait; it helps to get by in hard times. But deniability of past or repeated behavior when it results in harm to yourself or others is not a positive trait. In fact, as president of the USA, it endangers everyone. Trump’s State of Denial has led us to the current horrendous situation of not being as prepared as we could have been for the coronavirus, i.e. COVID-19.

For instance, South Korea announced its first coronavirus case just one day before the USA. Yet in the 7 weeks that followed, South Korea had tested more than 189,000 people, we had tested less than 2,000. We have a population over 6 times larger than them, to match their extent of coverage we would have tested 1.1 million people. As of March 21, less than a quarter-million in the US have been tested according to the John Hopkins School of Medicine The COVID Tracking Project. The Federal Government’s Centers for Disease Control and Prevention (CDC) as of March 23, had not publicly released the number of people who have been tested as of that date. Although at a press conference on that date a White House staff member estimated that 250,000 had been done.

The following are examples of Trump’s State of Denial and its negative impact on controlling the coronavirus pandemic.
TRUMP: “It’s something that nobody expected”
On Saturday, March 14, President Trump said that the coronavirus caught him and the world off guard. About a week later, on March 21, Trump repeated his denial of having any advance reason to expect a probable massive pandemic; “The magnitude is something that no matter who you were, no matter where you come from, nobody ever thought a thing like this could happen.”

Trump Was Given An Explicit Warning Of A Possible Huge Pandemic
In January 2017, as Trump was coming into office, the New York Times reported, “outgoing Obama administration officials ran an extensive exercise on responding to a pandemic for incoming senior officials of the Trump administration.” Trump has never denied this information being provided to him.
The New York Times also reported that in 2019 the Health and Human Services Department performed startling government simulations to show how underprepared the United States was for such a pandemic. Nothing was done in response. Department Secretary Alex Azar has mentioned these simulations at the White House Press Conferences.
TRUMP: “I don’t know anything about it”
At a March 13, 2020 press conference Trump said, “I just think it’s a nasty question,” when asked why he disbanded the Directorate, known as the “Global Health Security and Biodefense” team on the National Security Council, which was responsible for coordinating federal agencies’ response to a pandemic outbreak. “And when you say ‘me,’ I didn’t do it. … I don’t know anything about it.”

Technically Trump is right, he didn’t disband the nation’s only Health Security Team, John Bolton did.
Trump appointed Bolton to lead the National Security Council in April 2018. A month later, Bolton eliminated the team for pandemic preparedness. It was created in the aftermath of the 2014-15 Ebola outbreak to avoid seeing again a fragmented U.S. response and preparedness strategy and ended up costing U.S. taxpayers $5.4 billion in emergency supplemental funding.

On May 7th, 2018 Luciana Borio, director of medical and biodefense preparedness at the NSC, spoke at a symposium at Emory University “The threat of pandemic flu is the number one health security concern,” she told the audience. “Are we ready to respond? I fear the answer is no.”

Bolton said he intended to streamline the NSC, which it may have done, but at the cost of not having anyone around to coordinate a response to a pandemic so the country would not end up where they are now, repeating our Ebola experience. Bolton’s first step was to eliminate the team’s Director position and then disperse the team staff across other parts of the NSC which focused on other priorities; two of them went to the Weapons of Mass Destruction Directorate within NSC.

TRUMP: “I’m a businessperson,” he said in denying the need to fund scientists working on disease control.

During a February 26, 2020 briefing on his coronavirus response, Trump said he cut global health experts from federal staff and tried to slash funding for the World Health Organization and the Centers for Disease Control and Prevention, who try to spot and respond to epidemics. “Some of the people we cut, they haven’t been used for many, many years,” Trump said justifying those efforts. “I’m a business person — I don’t like having thousands of people around when you don’t need them,” he said. “When we need them, we can get them back very quickly.”
Shrinking government budget may be good unless it costs the public a trillion dollars later.

Trump’s logic of eliminating a government professional group to fight a pandemic runs counter to organizational consultants who point out that eliminating positions that are highly skilled do not result in cost savings but result in lager long term costs in finding replacements or teach new ones. On Jan 29, 2018, a coalition of global health of 200 organizations and companies sent a letter to U.S. Health and Human Services Secretary Alex Azar asking the administration to not cut funding to programs as essential to health and national security, warning there will be ever more costly outbreaks.

Two years later, on February 25, 2020, Larry Kudlow, director of the National Economic Council, was in the Trump State of Denial, telling CNBC that the government had “contained” the coronavirus and would not seriously harm the economy. “I don’t think it’s going to be an economic tragedy at all.” By March 21, 2020, Kudlow switched to getting the Deep State to start spending more than $2 trillion to save our economy through a stimulus package in the Senate to stop a depression because of the coronavirus pandemic, which had never been “contained.”

TRUMP: He first learned about the coronavirus when he closed the border to China

At the White House, March 21 Press Conference Trump was asked “When did you first learn that this was going to be a problem? (in reference to the spread of the coronavirus). He responded, “When I learned I started doing the closing, so probably around that time. We didn’t know about it until it started coming out publicly, but I wish they could’ve told us earlier about it, because we could’ve come up with a solution. They (referring to the White House Coronavirus Task Force) read about it in the newspapers like everybody else.”
Why wasn’t our State Department functioning to inform Trump?

The reporter who asked that question should have followed up by asking “When did our Ambassador to China, Terry Branstad, inform our State Department about a dangerous virus outbreak in the city of Wuhan?” The first death from an illness caused by a new lethal virus occurred there on January 11, 2020, as reported by Chinese state media The Xinhua news agency.

That information would have obviously been available to our ambassador and our foreign service corps. Did they inform Secretary Mike Pompeo? Or, as former Ambassador to the Ukraine Marie Yovanovitch has accused the Trump administration, had our experienced foreign service personnel been dramatically reduced, because of a fear that there is a Deep State conspiracy to undermine Trump’s authority, that they were not functioning properly?

The next major event occurred on January 23 when Chinese authorities cut off Wuhan, a city of more than 11 million, by canceling planes and trains leaving the city. At this point, at least 17 people had died there. Were Trump and Pompeo still uninformed of this development?

It was not until January 31, that Trump said he became aware of the problem and suspended entry into the United States by any foreign nationals who had traveled to China in the past 14 days. That was one day after the W.H.O. declared a global health emergency, where 213 people had died and nearly 9,800 had been infected worldwide. How could he not have been aware for over two weeks that there was a new lethal virus spreading? Was it because he called this developing virus pandemic a “Chinese” virus that he optimistically believed would not affect America? However, since he had disbanded the group of experts two years prior who were trained to track such a threat, so who was around to warn him?

TRUMP: “It may get a little bigger; it may not get bigger at all,”

On February 26 at a White House Press Conference – Trump said regarding those with the coronavirus, “We have a total of 15, they’re in a process of recovering, with some already having fully recovered.” He was not including those on the cruise ship from Japan.

By denying that the coronavirus could manifest into a potential epidemic in the US, Trump decided, along with Fox News and some Republicans, to blame the Democrats and the media for creating panic.

Trump tweeted on February 26 “Low Ratings Fake News MSDNC (Comcast) & @CNN are doing everything possible to make the “Caronavirus” (his spelling) look as bad as possible, including panicking markets, if possible.” The next day Fox News Commentator Laura Ingraham called Democrats the “pandemic party” and trying to undermine Trump’s administration. That same day another Fox News Commentator Sean Hannity said the Democrats “sadly politicizing and weaponizing an infectious disease as their next effort to bludgeon President Trump.”

Trump continued to politicize the coronavirus at his campaign rally in North Charleston, S.C on February 28, by accusing the Democrats of “politicizing” the coronavirus, saying “This is their new hoax. Democrats will always say horrible things,” Trump said. “Democrats want us to fail so badly.”

On February 29 “It may get a little bigger; it may not get bigger at all,” Trump said in a national TV address at the time.

Trump’s antipathy toward the Deep State has reshaped the Republican Party’s character from being small-government advocates to a grievance coalition highly skeptical of government, borrowing Washington Post reporter Robert Costa’s description. That attitude was reflected by a number of Republicans echoing Trump and making light of a possible coronavirus pandemic. Trump’s leading Congressional defender Rep. Devin Nunes (R-Calif.), on March 8, dismissed concerns about the coronavirus pandemic and said on Fox News that “it’s a great time to just go out, go to a local restaurant.”

It wasn’t until March 13 that Trump declared a national emergency, which would have been six weeks since he said he became aware of the coronavirus as a “problem”. The explosion of infections was so great by the time Trump declared a national emergency that the legendary GOP strategist Ed Rollins, who now chairs a pro-Trump super PAC, said, “The right underestimated this and thought the media was beating up on Trump again.”

Bottomline Of This Exercise

Any national leader must accept responsibility for their past actions and their publicized opinions, especially when it impacts the security of our nation’s health. President Trump’s attitude to the approaching pandemic has not been one of optimism but of denying the probability of its existence and of deflecting responsibility for appropriately responding.

The result may be why our nation now has the third-highest number of confirmed cases of COVID-19 in the world, going from 1,645 people on March 12 to 43,000 as of March 23, a span of 11 days. And, we are still struggling to contain the outbreak and providing medical supplies to our state governments and hospitals as well as supplying the proper safety gear for our health care workers.

Competency is not determined by party affiliation, but by the performance of our nation’s leadership. The Trump Administration has not had a record of competency in fighting the coronavirus.