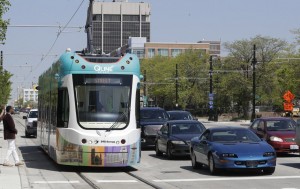 Seattle City Council has begun the process for funding the construction and operation of a downtown streetcar project called the Center City Connector Streetcar, and referenced as the CCC. Initially the advocates argued that the CCC was a transportation solution for connecting the South Lake Union and the First Hill streetcars. However, it doesn’t make much sense for anyone to get on the First Hill streetcar at a Capitol Hill stop, like Denny and Broadway to get to SLU, when they could get there in a third of the time by just taking the number 12 bus to downtown, or another bus line at a different stop, and then board the SLU streetcar.

That detail has not deterred the Seattle Downtown (business) Association as its biggest promoter. They have been angling for a downtown streetcar for at least 10 years. As a councilmember during that entire time, I often hosted supporters in my office to listen how Seattle’s downtown could be more prosperous if we had a streetcar running right through downtown’s already congested streets.

The best argument for building the CCC might be that it will encourage shoppers to visit a number of retail establishments along the line, as long as it has enough stops, which would slow it down. Pioneer Square businesses owners also hoped it would deliver increased pedestrian traffic to them, which has clustered further north along First Avenue. However, this business development objective really makes the CCC an economic stimulus project not a transportation project. The advocates soft-peddle that rationale because the city needs federal transportation funding to build the CCC, and those funds are intended to serve transit needs.

WHO IS PAYING FOR THE CCC?

This conflict begged the question that the council needed to answer: What are the public costs and transit benefits for building and maintaining the CCC? To provide that answer, Councilmember Lisa Herbold amended Council Bill Number: 119008which accepted $50 million in federal dollars towards this project, by requiring our Seattle Dept. of Transportation (SDOT) to report to the council detailing the financial operating plan for the CCC, the projected performance measures and contingency plan for funding CCC should the additional federal $25 million that the city expects to receive did not materialize.

Even if those funds are received, the city is already prepared to spend $52 from our transit budget to build the CCC. What other transit needs will be sacrificed? For the SLU streetcar bus service hours were diverted from lower income families being served by bus routes in the Rainier Valley. This was a social justice issue that residents in the south end of Seattle raised and protested the cut in their bus routes.

An article in City Lab concluded, “Taxpayers are picking up most of the bill for the 21st century streetcar renaissance—money which could otherwise support more effective forms of public transportation.” Check it out here

Director of Transit & Mobility Andrew Glass Hastings delivered the required report 2 weeks ago to the Council. His revenue projections are more aspirational than rational. The bulk of the streetcar network’s operational income will come from ridership. The city’s transportation department wrote that the project would increase the entire streetcar network average daily streetcar ridership from approximately 6,000 today to an estimated 25,000 average daily riders by some unspecified date in the future. However their report shows that by 2025 their daily average riders will only represent 38% of the 25,000 target. Even if they meet 2025 goal, it appears to be unrealistic since it represents an increase of over 400%. Meanwhile, the SLU streetcar has experienced a decline in ridership of 32% since 2013 due to reduced congestion and improved bus service serving South Lake Union. Improved bus service is siphoning off riders from the SLU streetcar.

After reviewing SDOT’s report, the Council’s central staff continued to believe there is financial risk in the Center City Connector’s financial plan. Although, they added that much of this risk already existed with operating the South Lake Union Streetcar and First Hill Streetcar lines, and is not directly attributable to the CCC. In other words, the current streetcar system will continue to face the same financial problems it has now.

If the predicted ridership for the CCC follows the same course as what happened with the SLU line, which the city still has an outstanding loan of over $3 million to support SLU Streetcar operations, where will the additional revenue come from? The expectation is that both King County and Sound Transit will continue their annual subsidies for our two existing streetcar lines and will presumably also help subsidize CCC’s costs.

WHO WILL HELP SUBSIDIZE THE CITY’S STREETCAR NETWORK

For the SLU Streetcar, King County Metro provides an annual contribution that escalates to $1,550,000 in 2019, when the current operating agreement expires. SDOT anticipates that a future agreement will maintain this level of support. This subsidy will probably come by moving service hours that could be devoted to providing more reliable bus service to employees and shoppers coming into downtown rather than paying for a streetcar trying to move through downtown traffic that will not help anyone get to work on time.

For the FH Streetcar, Sound Transit provides a $5,000,000 annual contribution through 2023. SDOT anticipates that a future agreement will maintain this level of Sound Transit support; however, the voter-approved ST3 ballot measure did not include any funding for this purpose. Will the city then be on the hook?

The city council’s central staff also raised an intriguing scenario: the city could be exposed to a greater financial risk of losing Sound Transit funding in the future if the CCC is built because then the city will be operating one interconnected system. Sound Transit funded the FH Streetcar because it served a discreet function of providing access to downtown that was abandoned by Sound Transit when it did not build a First Hill station. However, when the CCC is complete it will be harder to characterize the First Hill segment as a discrete portion of the line that Sound Transit must maintain. If it does divest, the City will then have to pick up the $5 million annual tab.

SDOT’s report to the Council said any future funding shortfalls, like not getting the additional $25 in federal transportation funds that the city has applied for but has yet to receive, could be met by possible additional revenue sources like increased sponsorship and increased fares.

The promise of corporate sponsorships as a streetcar revenue source is like searching for the Holy Grail, it’s got to be out there somewhere. But not in Seattle. Sponsorships did not stop the SLU streetcar from going into the hole. No mention is made in the SDOT report on how much sponsorships currently contribute to either of the existing streetcar lines. For the year 2020, when the CCC is expected to be completed, annual operating costs are just over $16 million for all 3 lines and less than a million in sponsorship revenue is expected; no projection for future years is even attempted.

The one reason that the CCC is being pushed through right now is the lure of receiving free money, i.e. the $50 to $75 million that the feds will be giving to Seattle to build it. But free federal money is not always going to lead to the best solution to improving our urban environment.

Citizens in 1971 realized that when they rejected, by initiative, receiving millions in federal dollars for an urban renewal project that would replace 90 percent of the Pike Place Market with offices, hotels, and parking garages. They were not deterred by the city council voting unanimously to approve the renewal project and both daily newspapers supporting that decision.

Aside from the financial risk of building and maintaining the CCC, what will be the actual transit benefits? It’s already apparent that it will not serve working people trying to get to their jobs downtown, but will the CCC allow workers or shoppers to move more quickly through it? That’s doubtful. A robust network of bus routes 40, 62, and 70 already connects the ends of the two existing streetcars, along with Link light rail, which is faster than the CCC will ever be.

What makes the CCC particularly challenging is that it will be happening at the same time as the deep bore tunnel opens – closing the current bus tunnel to buses, and I-90 buses will be slowed by the second phase of Sound Transit construction on I-90. The cumulative impact will be more traffic diverting to 2nd and 4th avenues and very likely leading to gridlock.

Budget Chair Councilmember Herbold considers SDOT’s report a non-answer to the Council’s questions of where the funds will come from. She concludes that unfortunately, the only realistic funding sources may be to cut other spending, such as roads, sidewalks, bike lanes, proactive landslide prevention, and transit. Read her newsletter to understand how $4 million of the city’s limited revenue stream from the Commercial Parking tax could be diverted for the next 20 years to pay for the CCC.

It is clear that the CCC streetcar is only a downtown circulator. Public transit is already good downtown it’s everywhere else in Seattle that commuters need more reliable and frequent bus service. Worse still, there is a fair chance that the CCC streetcar would make downtown circulation worse since it will be using limited right of way space that will be desperately needed for the additional busses that will be pushed out of the bus tunnel.

First Avenue should handle more public transit and shifting bus routes there would be much more cost-efficient than spending at least $60 million in local tax revenues for building a streetcar line. And, that’s assuming the feds cough up another $25 million, if SDOT’s ridership numbers are accurate, and that both King County and Sound Transit continue to subsidize our streetcar system. Not to mention any possible cost overruns.

Other cities have faced similar decisions. Many do succumb to the charm of streetcars as well as the influence of well-organized interest groups that would benefit from such grand public expenditures, such as developers, property owners along the lines, consultants and construction companies. However, just last year, Rhode Island leaders decided that the streetcar wasn’t the right answer for downtown Providence.  They redirected their federal funding for a streetcar into a bus-based project in the same downtown corridor with buses coming every 4-5 minutes. It would provide the same reliable service that a streetcar would but more importantly it would allow major bus lines to continue to serve those outside the downtown neighborhoods.

The Seattle City Council has been in the national forefront in recognizing that social justice issues must be addressed in our policies and projects. But sometimes they are difficult to apply to capital projects, particularly attractive ones like the proposed Center City Connector Streetcar. Nevertheless, in this instance there is a social justice issue that will impact the poor and the middle class. Will our public dollars be spent most efficiently on a project that does not increase the ease of getting to work downtown? There is scant evidence that laying down those rails will make Seattle any more livable or affordable for its residents.

The Council could hold up any further expenditure on the CCC project, until an outside neutral party can determine if it will benefit residents and employees throughout the city by providing them better access to downtown. That motion could be made by 3 councilmembers introducing a Budget Proviso. However, they would need to do so by this coming Thursday. If they do, then this proposal could be discussed before the full council.

If this approach strikes you as a reasonable step in doing due diligence please let the councilmembers know by emailing citycouncil@seattle.gov and all councilmembers will receive your message.

The city council’s Budget Session I begins at – 10:30 a.m., or right after the Council Briefing meeting, this Monday to discuss SDOT’s budget. Questions about the CCC may be raised. Public testimony will be held just before the meeting begins. Watch the meeting live.